Who Is Warren Buffett?

Warren Edward Buffett is an American business magnate, philanthropist and one of the most successful investors of all time. He is known for his impressive stock market returns throughout his investment career, and is known as the “Oracle of Omaha“.

He is also the CEO and largest shareholder of Berkshire Hathaway Inc., an American multinational conglomerate holding company. Buffett currently has a 16.45% stake in Berkshire Hathaway, worth a staggering $US81.89 billion at the time of writing.

Buffett graduated from the University of Nebraska with a Bachelor of Science in Business Administration at the age of 19. He then went on to study at Columbia Business School, where he graduated with a Master of Science in Economics at 21 years old.

It was at Colombia Business School that Buffett met his future mentor, and legendary value investor Benjamin Graham. Author of Security Analysis (1934), The Intelligent Investor (1949) and one of the most successful value investors of all-time. It was here that Buffett developed the value investing methodology that would guide his investments for years to come.

Buffett has promised to donate more than 99% of his wealth to philanthropy during his lifetime or at death and has already donated $US3.4 billion to charitable causes, including the Bill & Melinda Gates Foundation.

Buffett was born in 1930 in Omaha, Nebraska, to his mother Leila and father Howard. Buffett was the second eldest of three children.

At age seven Buffett borrowed a book from the Benson library in Omaha called “One Thousand Ways to Make $1000”. This inspired him to begin his entrepreneurial ventures. Buffett soon began selling items door to door including Coca-Cola, chewing gum, and newspapers.

He bought his first stock at age 11, with money he'd saved up from his business ventures. Buffett bought 6 shares of Cities Service at $US38 a share. The stock's price soon fell below $US30 a share. Frightened, he sold his shares once they rebounded to $US40, making a $US2 return. Cities Service soon shot up to $US200 a share. This taught Buffett a valuable lesson on patience that would guide his investment decisions for a lifetime.

In his senior year of high school, Warren and a friend purchased a used pinball machine for $US25 ($281.65 today). He placed it in a nearby barber shop. Within months, he owned three machines in three different locations. He later sold the business for $1,200 ($13,519 today) to a war veteran.

Warren Buffett is a self-made billionaire who became wealthy at a young age, as I will explore below.

This was also the year that Buffett reorganized his partnerships into a single entity. And moved the partnership office from his home to Kiewit Plaza, Omaha, where he works today.

Buffett became a billionaire when he was 56 years old.

His net worth is over $US83.4 billion today. This makes him the 3rd richest man in the world, after Jeff Bezos and Bill Gates.

In 1962, Warren Buffett began purchasing shares in Berkshire Hathaway, (a struggling New England textile company) after noticing a pattern in the share price whenever the company closed a mill. Buffett finally accepted that the company's financial situation was not improving, and the textile industry was diminishing.

In 1964, Stanton, who was the president of Berkshire at the time, offered to buy back Buffett's shares at $US11.50 apiece. Buffett agreed to the deal. A few weeks later, Buffett received the tender offer in writing, but the offer was for only $US11.375 a share.

In Buffett's words: “That made me very mad, so I just started buying more stock,”. Consequently, he bought out the whole company and fired Stanton.

Foreign competition was shrinking Berkshire's profit margins, and they continued to struggle financially for years to come. Eventually, in July of 1985, Buffett closed the books on Berkshire's textile operations.

In 1967, Buffett began purchasing insurance companies. The nature of the insurance business appealed to Buffett. People can only withdraw their deposits when something bad happens. Consequently, providing Buffett with a huge cash balance to accelerate his investment operations. At the time, he was purchasing stocks with cash that was technically a liability. 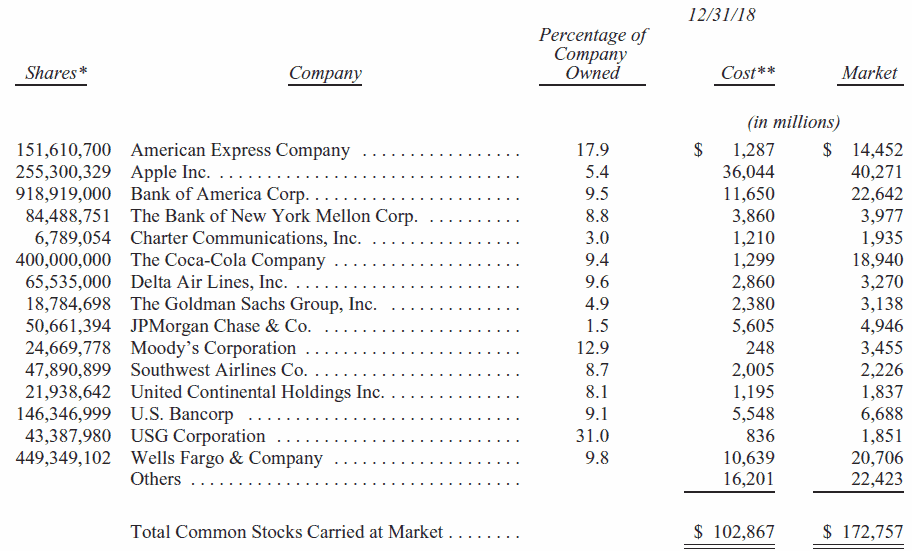 Buffett employs a value investing approach, meaning he assesses the fundamentals of a company to determine its value.

The focus investor believes the highest level of success is attained when funds are invested in a small selection of companies. Whether that is as few as three, or as many as eight stocks. Generally, the focus investor will not include more than eight stocks in their portfolio. As Buffett said: “diversification is protection against ignorance. It makes little sense if you know what you are doing.”.

Coca-Cola represented roughly 35% of Berkshire's stock portfolio at its peak concentration. And this investment paid out handsomely once its true value was realized by the market. Buffett has spent US$1.29 billion purchasing Coca-Cola stock since 1987, and this investment had appreciated to $US18.35 billion by the 31st of December, 2017.

For more information on focus investing, visit the link provided.

Firstly, Benjamin Graham is known as “The father of value investing” and provided Warren with an in-depth understanding of this approach. Essentially, Graham paid $0.50 for a $1.00 stock that had been undervalued by the market.

To quote Warren Buffett: “To me, Ben Graham was far more than an author or a teacher. More than any other man except my father, he influenced my life.”. Warren E. Buffett (1973) in the preface to the Fourth Edition of The Intelligent Investor: The Classic Text on Value Investing.

Phillip A. Fisher had a contrasting approach and typically purchased carefully selected growth stocks. He would often talk to customers, former employees, executives and even employees of competing companies, to gain a better insight into a company before making an investment.

Lastly, we have Charlie Munger. Munger is the vice-chairman at Berkshire Hathaway and has held the position since 1978. When Munger arrived at Berkshire he brought not only financial judgement, but also the foundation of business law. This was an intellectual perspective that differed from Buffett’s.

Both men grew up in Omaha but did not meet until 1959, when a mutual friend organised a dinner at a local restaurant. Munger ran a successful law practice in Los Angeles. However, Buffett continuously encouraged him to quit law and focus on investing. Which he did, and eventually became the Vice Chairmen of Berkshire Hathaway.

If you would like to learn more about Warren Buffett, I would recommend the following resources:

As seen on IMDb.com: “The legendary investor started out as an ambitious, numbers-obsessed boy from Nebraska and ended up becoming one of the richest and most respected men in the world. “

The Snowball: Warren Buffett and the Business of Life (Biography)

Buy it here: The Snowball: Warren Buffett and the Business of Life

As seen on goodreads.com: “Here is THE book recounting the life and times of one of the most respected men in the world, Warren Buffett. The legendary Omaha investor has never written a memoir, but now he has allowed one writer, Alice Schroeder, unprecedented access to explore directly with him and with those closest to him his work, opinions, struggles, triumphs, follies, and wisdom. The result is the personally revealing and complete biography of the man known everywhere as “The Oracle of Omaha.”

Here is a great infographic by Washington State University covering some of Buffett's investment principles in detail.

In the guide, you’ll find facts and figures on the following: