This post may contain affiliate links, please read our disclaimer for more info. 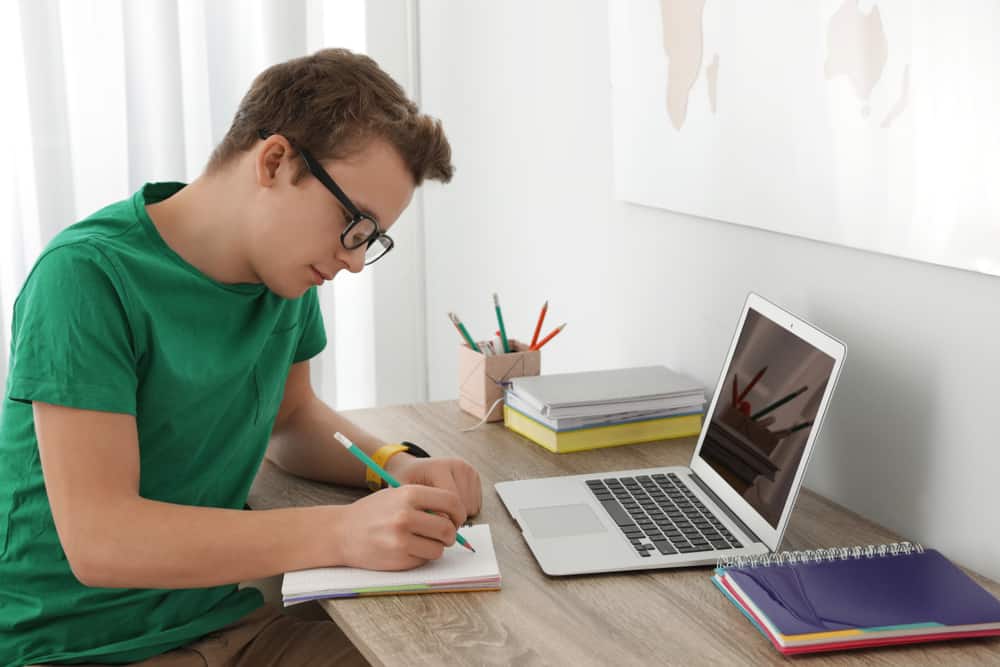 So you're here because you want to know how to invest as a teenager.

Well, the good thing is that you can start investing as a teenager, technically.

To invest as a teenager, you'll have to invest through a custodial account.

There are two types of custodial accounts, but the one you'll be interested in is called a Uniform Gift to Minors Act (UGMA) account. This kind of custodial account is limited to financial assets like cash, stocks, bonds, or mutual funds, annuities, and so on.

The other custodial account is called a Uniform Transfers to Minors Act (UTMA) account. It allows you to invest in virtually any kind of asset, including real estate, intellectual property, art, and so on.

All US states allow you to open UGMA accounts while you can only open Uniform Transfers to Minors Act (UTMA) accounts (the 2nd type of custodial account) in some states. So you'll want to open a UGMA custodial account to starting investing as a minor.

You can invest in financial assets like individual stocks, exchange-traded funds (ETFs), and annuities through your custodial account.

Control will be transferred from your parent (the custodian) to you (the beneficiary) once you reach the age of adulthood, which is 18-21 depending on which state you're in.

While you can't individually invest in your account, but your parents can “gift” funds to your account to invest.

An individual can contribute up to $15,000 or $30,000 for a married couple filing jointly—to an account in 2020 without incurring the federal gift tax.

Once the funds are in your account, you can start picking your investments.

Your parents will have to make the actual trades, but you can of course tell them what you want to buy.

The Best Ways to Invest as a Teenager

Once you've opened your UGMA custodial account, it's time to think about how you want to invest your money.

Here are the 10 best ways to invest as a teenager.

1. Invest in Individual Stocks Through a Discount Broker

I believe that the best way to start investing is through the stock market. The more money you have invested, the more you'll make.

It cannot be understated how important investing is to building wealth and achieving financial success over the long-term.

A discount broker will allow you to invest in stocks, bonds, ETFs, options, and futures.

It's cheaper to trade through a discount broker than a full-service broker, but they still charge fees. These fees typically range from 0.12% to 2% per trade depending on the broker.

Webull is a commission-free trading platform that gives you the tools you need to analyze and buy stocks.

This makes Webull a great option whether you’re new to investing or an experienced trader.

You can learn more about the platform through my Webull review here.

This is my, and billionaire investor Warren Buffett's recommended way of making money in the stock market.

An index fund is a fund that purchases all of the stocks that make up an index. Some stock market indexes include the S&P 500 and the Dow 30.

That includes a 4.3% dividend yield, which is the income you'll make for investing in the fund. If you invested $1,000 in the fund I mentioned, you would receive $43 in income a year on average.

The fact is that only 1/20 managed funds beat the S&P 500 index on any given year. So you might as well save money on fees and just invest in an S&P 500 index fund to grow your money.

3. Invest in a Mutual Fund

Investing in a mutual fund (professionally managed fund) is another great hands-off way to grow your money.

Mutual funds pool money from many investors to invest in securities like stocks, bonds, and other assets.

Mutual funds are operated by professional money managers who often have advanced degrees in finance and economics. The manager, along with their team of analysts, allocate the fund's assets to attempt to produce capital gains and or income for the fund's investors.

Mutual funds are a big operation, but as I mentioned earlier, only have a 1/20 chance of beating index funds.

I believe that you're better off investing in the iShares' Core S&P 500 ETF. However, I do know that some people have greater peace of mind knowing that their money is being managed by a professional. So this is another way you can go.

According to Morningstar, the average large-cap fund with assets greater than $5 million has an expense ratio of 1.45%.

Index funds, however, typically charge minimal fees of roughly 0.03%-0.10% annually. This is why index funds are growing in popularity when compared to mutual funds.

Here are three of the largest mutual fund companies in the US:

4. Invest in Stocks Through a Full-Service Broker

Another way to invest in stocks is through a full-service stockbroker.

Full-service stockbrokers are a bit different from discount brokers, and they do more than facilitate the buying and selling of stocks.

Full-service brokers are a better option for investors who want professional investment advice.

They are more expensive, however. Full-service brokers typically charge 1-2% of the total assets managed annually.

Buying stocks through a full-service broker is another common way to invest your money if you don't know much about the stock market.

5. Invest in Stocks Through a Robo-Advisor

Investing with a Robo-advisor is another way to invest in stocks as a newbie.

A Robo-advisor is basically your personal portfolio manager—except it's a software-based algorithm.

The Robo-advisor will automatically pick your investments, diversify your funds, and adjust your portfolio over time. These changes are all based on your chosen long-term investment goals.

My favorite Robo-advisor is M1 Finance.

M1 Finance allows you to easily invest in stocks and ETFs without personally managing your investments.

First, you select your investments and your allocations, then the platform automates your entire portfolio!

The platform has 80 “expert portfolios” or pies to choose from. These pies allocate your money depending on your individual investment goals.

M1 Finance has become the go-to platform for automated investing. You can learn more about the platform through my M1 Finance review here.

If you want to know how to invest in real estate when you can't afford an entire house, this is for you.

And don't worry, you don’t need hundreds of thousands of dollars to start investing in real estate, you can get started with just a few dollars.

So what is a real estate investment trust?

You can purchase shares in a REIT mutual fund or an Exchange-Traded Fund (ETF). Over 80 million Americans or roughly 40% of America’s households own REITs.

Investing in a REIT is a great way to invest in the property market with only a few dollars.

REIT shares are priced by the market throughout the trading day, like all companies that are publicly traded.

Some REITs to Invest In

Here are some of the largest and most well-known REITs for you to consider:

There are more lucrative ways to start investing as a teenager, as I've explored earlier, but high-yield savings accounts do have their advantages.

Savings accounts are a great place to put your cash for a short period, meaning you can typically withdraw your money without incurring a penalty.

High-yield savings accounts are a great way to store your money with minimal risk while obtaining a modest interest rate.

Opening a Savings Builder account with CIT Bank is the best way to invest your money if you want to be able to access it if needed.

8. Open a Certificate of Deposit (CD)

A certificate of deposit is a product offered by banks and unions that provides a premium interest rate in exchange for you agreeing to leave your lump-sum deposit untouched for a predetermined amount of time.

CDs typically offer a higher interest rate than a high-yield savings accounts, but it can be annoying to lock your money away for 1-5 years.

You're probably better of investing your money in a high-yield savings account if you want to be able to access your money quickly.

Open an individual retirement account (IRA) is another way to invest your money for the long-term.

Opening an IRA has several advantages. You can invest money with pre-tax income which will reduce your taxable income and you won't have to pay taxes on gains until you are 70.5 years old (which is a long time away)!

It's hard to think that far ahead, but hopefully this example will help.

Here is a graph showing what that would look like, using this compound interest calculator. 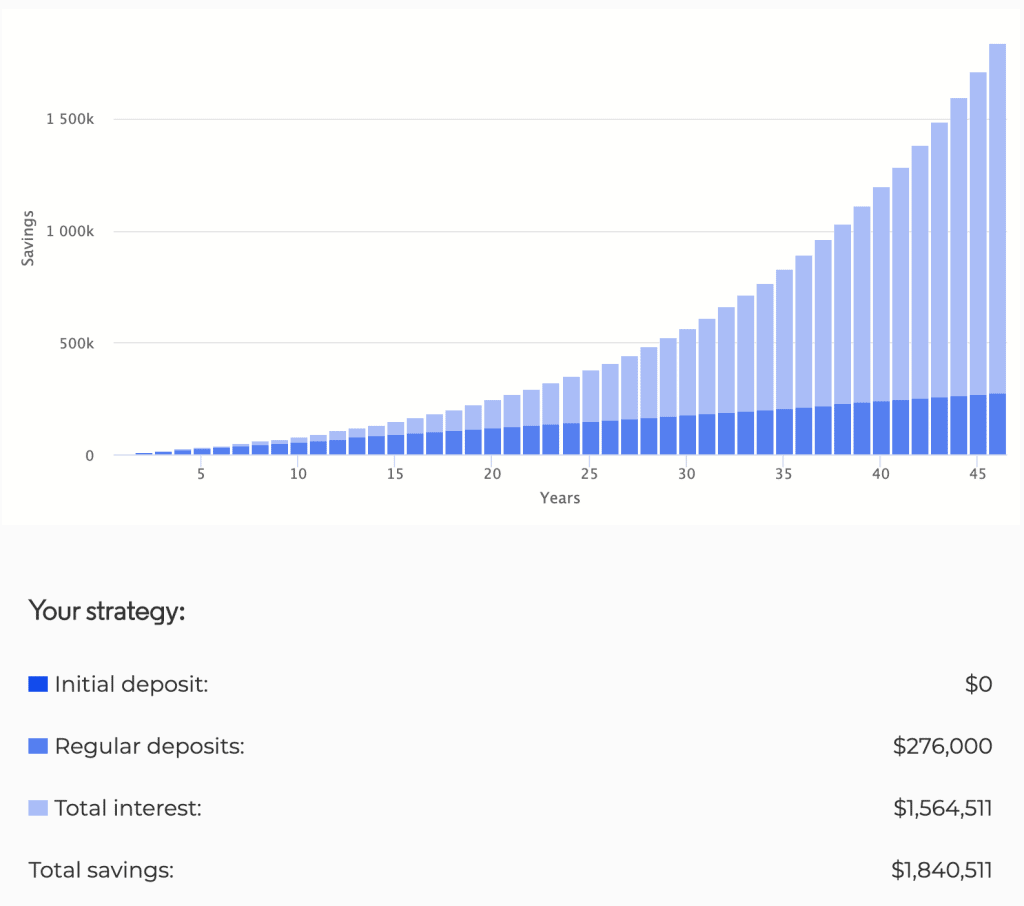 Also, something to consider is that your IRA contributions cannot exceed your earnings. For example, if you made $1,000, you can only contribute $1,000 to your IRA in that year.

Another retirement account you can open as a teenager is a Roth IRA. Roth IRAs are similar to traditional IRAs, but they do have a few differences.

Roth IRA contributions are made after-tax, so you don't have to pay taxes on gains you make through this investment, which is great!

You can withdraw money from your Roth IRA tax-free including gains as long as you're over the age of 59.5 and your account has been open for at least five tax years.

You will have to pay a 10% withdrawal fee and income taxes if you make a withdrawal that is not a “qualified distribution“. So you should only invest money in your Roth IRA that you do not plan to use until retirement.

Other Taxes and Fees That Come With Investing

Every child under 19 years old (24 for full-time students) who files as part of their parents’ tax return is allowed a certain amount of “unearned income” at a reduced tax rate.

Conclusion on How to Invest as a Teenager

As you can see, there are plenty of ways you can invest your money as a teenager through a custodial account.

It's great if you have parents to help you set up a custodial account, and even better if they have some investing experience of their own!

Which investment will choose will depend on how long you want to store your money away and what asset class is most suitable based on the frequency of dividends or other distributions.

It's great to see that you're interested in investing at this young age. Your investments will grow exponentially in the stock market, so you will get the most benefit by investing now and investing consistently over time.

I’m Jasper Stojanovski, a 22-year-old guy from Geelong, Australia. I am in my first year at Deakin University and I’m studying for a Bachelor of Commerce degree. I plan to major in accounting and finance so I can learn more about personal finance and investing!