This post may contain affiliate links, please read our disclaimer for more info.

Investing your first $1,000 can be exciting and intimidating.

A lot of people underestimate how important investing is to wealth-building and I'm going to explain why. 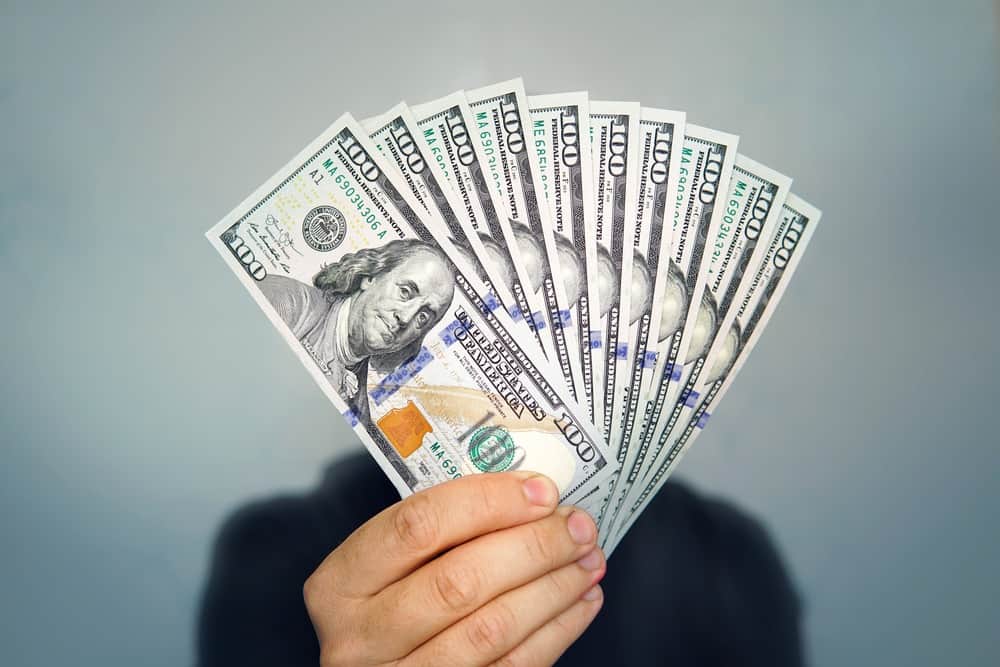 And what if you're new to investing? Where do you start? Well, don't worry. I'm going to answer all of those questions in this article.

Let's dive into my guide on how to invest $1,000 and make your money grow.

Even investors like Warren Buffett praise index funds. Buffett once said, “A low-cost index fund is the most sensible equity investment for the great majority of investors”.

Whether you're looking to invest in your 20s or even your 50s, investing in index funds is a great way to build wealth over time.

Index funds give you exposure to the stock market through a diversified portfolio of well-established companies.

Your money will grow at an average interest rate of 7% annually (adjusted for inflation) when invested in an S&P 500 or Dow Jones index fund.

Your portfolio will double in value every 10 years on average at this interest rate.

This might not sound significant, but your money will grow exponentially.

I'd recommend the iShares Core S&P 500 ETF above any other actively or passively managed fund. They purchase all of the stocks in the S&P 500 index, with annual fees of just 0.03%.

Investing in this fund is the best way to grow your money with minimal effort or investing know-how.

The best way to invest in the iShares Core S&P 500 ETF is through the Webull app. You can view our full review of Webull here.

Investing $1,000 in stock market index funds is a great way to start growing your money today.

Almost anyone can become a millionaire from nothing by investing 15% of their after-tax income into index funds throughout their career.

Investing your money in a mutual fund is a great hands-off way to grow your money.

A mutual fund is an investment vehicle where money is pooled from investors to invest in securities like stocks, bonds, and other assets.

Mutual funds are operated by professional money managers who often have advanced degrees in finance and economics. The manager, along with their team of analysts, allocate the fund's assets to attempt to produce capital gains and or income for the fund's investors.

This is one of the best ways to invest if you just want to grow your money without thinking about it.

According to Morningstar, the average large-cap fund with assets greater than $5 million has an expense ratio of 1.45%.

For example, if you invested $1,000 in an average large-cap fund, you would have to pay $14.50 in fees annually. This is a small price to pay for your peace of mind, knowing that your money is managed by a professional.

Here are three of the largest mutual fund companies in the US:

If you don't know much about the stock market but still want to invest money, you might consider using a Robo-advisor platform.

Robo-advisors are investment companies that create software designed to automatically manage your portfolio based on certain criteria. For example, upon signing up they might ask you what your investment goals are and what your risk tolerance is.

Investing $1,000 with a Robo-advisor is easy—and they are popular because they have low minimums and automated portfolios.

My favorite Robo-advisor is M1 Finance, which you can learn more about below.

Here is a full review I created of M1 Finance.

REITs work much like mutual funds, in that they pool capital to invest in assets. This allows you to earn dividends from real estate investments without buying, managing and financing any rental properties yourself.

Investing $1,000 in a REIT is a great way to start buying real estate. Over 80 million Americans or roughly 40% of American households own REITs.

REIT shares are priced by the market throughout the trading day, like all companies that are publicly traded.

REITs will typically increase in price when their earnings increase. Growth in REIT earnings is typically generated by higher revenues, lower costs, and opportunities to purchase assets.

Some REITs to Invest In

Here are some of the largest and most well-known REITs for you to consider:

Opening a savings account is often the first step people take to take control of their finances. Savings accounts are a great way to stash cash for the short-term.

Consider checking out CIT Bank's Savings Builder account to get started. Their savings builder account offers some of the highest interest rates of any savings account.

While savings accounts are a safe way to store money, they are anything but lucrative. The interest rates are so low that you will probably lose money after adjusting for inflation, yikes!

Investing $1,000 in a high-yield savings account is a great idea if you want to be able to access your money quickly while earning a reasonable rate of interest.

U.S Treasury bonds are a great long-term, secure investment that will provide you with an ongoing source of passive income.

Investing $1,000 into U.S Treasury bonds might be the right choice if you want to have some more stability in your portfolio.

Savings or Treasury bonds are issued by the United States government and are some of the safest bonds you can buy.

You will typically make a 1-3% annual return when investing in US treasury bonds, but the interest rates change regularly.

This is not the best way to invest $1,000 to build wealth, but at least you know you won't lose your principal.

Bonds are typically safe, but the type of bond you buy will influence the level of risk involved with this investment.

There are many types of bonds including, but not limited to Premium bonds, Treasury bonds, corporate bonds, and Junk bonds.

The safest option is to invest in US Treasury Bonds.

Opening a Roth IRA is a great way to invest $1,000 for retirement.

A Roth IRA is a type of retirement account that you fund with post-tax income. You are free to withdraw any contributions you have made tax-free, but you may have to pay taxes on earnings.

You have more control over a Roth IRA than you have with an employer-sponsored retirement account.

When Should I Open a Roth IRA?

You should open your Roth IRA early when you are young and in a low tax bracket. This way, you'll be able to make contributions while paying minimal taxes.

This is predicated on you having a modified adjusted gross income (MAGI) of less than $122,000 annually.

Remember to open your Roth IRA as early as possible to get the maximum benefit.

Another great way to invest $1,000 is through peer-to-peer lending.

Peer-to-peer lending (P2P) is the practice of lending money to individuals or businesses through online services that will match you with a borrower.

You can expect to make a 3-7% return annually through P2P lending.

Peer-to-peer lending is a relatively new way of investing your money, with Prosper first launching in the US in 2005.

Here are some peer-to-peer lending platforms to get you started.

Upstart is one of the most popular peer-to-peer lending services available.

It was the first peer-to-peer lender to register its offerings as securities with the Securities and Exchange Commission (SEC). They were also the first P2P service to offer loan trading on a secondary market.

A word of warning before we move onto the next section. Borrowers can potentially default on your loan, putting you out of pocket.

Keep this in mind when considering peer-to-peer lending as a means of growing your wealth.

I bet you didn't expect paying off debt to be in an investing article, but hear me out.

Having debt is basically the opposite of having an investment. You are paying interest back to your lender instead of earning it.

You can expect to earn about 7% annually through the stock market, while you could be paying double-digit interest back to your lender!

This is why so many financial gurus like Dave Ramsey recommend paying down non-mortgage debt before investing for retirement.

And investing $1,000 to pay off debt could make a huge difference.

If $1,000 doesn't fully wipe out your debt you should be focusing on paying it off as soon as possible.

Every parent wants their student to live a successful life, and one path to success is through college.

But the fact is that college is expensive, and is showing no sign of slowing down.

Investing $1,000 now doesn't seem significant, but it will create a path for future investments into your kids' college fund.

So the average price for a four-year college degree increased by 2.6% annually throughout this period.

According to the Federal Reserve Bank of St Louis, wages only grew by 0.3% annually from 1989-2016. Meaning the average college tuition grew 8x faster than wages over the same period!

So, if you want your kids to go to college and you don't have the money ready now, you should consider saving for their college education.

If you're looking to invest $1,000 in a college fund, the 529 college savings plan is a great choice.

This plan has high contribution rates (depending on your state) and lets your money grow tax-free.

The right 529 plan will give you the option to change the beneficiary to another family member. So if your firstborn doesn't want to go to college, you can use the funds for the next in line.

Considering Investing in an Online Business

Thanks to the internet, you can launch a business with minimal capital or technical know-how. There are plenty of ways to invest $1,000 in a small online business.

You could invest $1,000 in a blog and start writing some articles on topics that you like or you could start an eCommerce store and try to make some money that way.

But I know that you're here because you want to make passive income. I just thought I'd mention these ideas in case you want to go that way!

Here is a graph showing what a $1,000 investment at age 25 would look like while growing at average stock market returns of 7% until age 65. 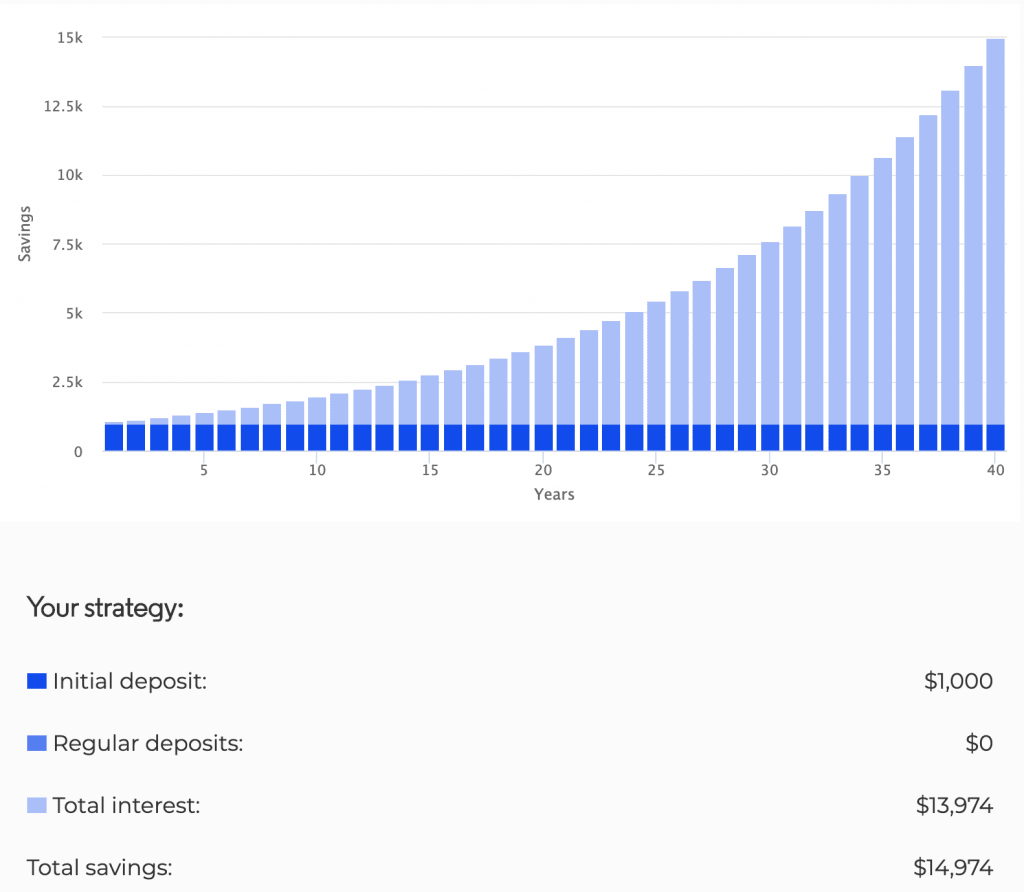 I made this graph with a great compound interest calculator created by ASIC.

You can become vastly wealthier if you continue to invest money in index funds throughout your career.

You can achieve these results with a discount stockbroker like Webull. You can learn more about Webull in my Webull review here.

These are some of the most lucrative ways to invest $1,000 and I hope there is an option that works for you.

Even though $1,000 isn't a huge amount of money today, your mere $1,000 investment could be worth significantly more down the track if you apply one or more of these strategies successfully.

And while I think index funds are the best way to invest $1,000, you can make plenty of money with the other options as well!

Don't forget to check out my Webull review to learn more about the best discount stockbroker.

If you have even more money to invest maybe you'd like to read our How to Invest 20k post!